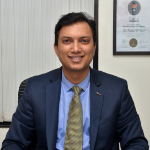 Dr Prakash Patil is a young and dynamic Orthopaedic Surgeon at Sahyadri Super Speciality Hospital Nashik. He did his M.B.B.S. from RMC, Loni (Ahmednagar) and later pursued his Diplomate of National Board (DNB) Orthopaedics in New Delhi. He has worked as a Senior Registrar in Orthopaedics Department in Jehangir Hospital and also as a Trauma Surgeon in their Emergency Centre.

He also has a rich experience of working at the Trauma Intensive Care Unit in BMC, Mumbai and Wockhardt Hospital, Nashik. He has been trained by international stalwarts in the field of Orthopaedic Surgery. He underwent his super-specialised training in Joint Replacement and Arthroscopywhilepursuing M.Ch. (Ortho) degree from Ninewells Hospital, the UK from the University of Dundee.

He pursued advanced orthopaedics in Glasgow & Edinburgh and completed his Fellowship in Joint Replacement and Arthroscopy from Edith Cavell Hospital, Belgium under the guidance of Prof. Dr Marc Clemens, one of the pioneers in western Europe. He has been at the centre of excellence in the field of Trauma and reconstructive Surgery at Katherine Hospital, Germany.

He mastered various techniques in Arthroscopy under French orthopaedic surgeon, Dr M. Collete in France. He has been instrumental in developing the Orthopaedics department at SMBT Institute of Medical Science and Research Centre, Nashik where he worked as the Head ofDepartment. His research in Orthopaedics has been presented at InternationalConference held by SICOT in Sweden. He has conducted various CME for practising doctors and specialists. He is a member of various National and international societies like 10A, MOA, ISHKS, lAS, NAILS, TSI and SICOT (Belgium).

He was also awarded the rank of Captain by Indian Army during his AMC selection at New Delhi. He performs Joint Replacement, Arthroscopy, and Advanced Orthopaedic Proceduresalong with routine trauma, full-time at Sahyadri Super Speciality Hospital Nashik.