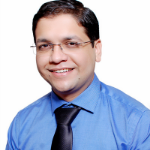 Dr Sagar Vivek Kakatkar has been practising as a consultant of Shoulder, Knee and Elbow specialist in Nashik. After finishing his M.B.B.s. from Wardha, he did his D. ortho from Mumbai. He later did his M.s. (orthopaedics) from Dr. vPMcH, Nashik and stood second in the university exams.

He went on to get D.N.B. orthopaedics and M.N.A.M.s. from Nationale Board, Delhi. Pursuing his interest in Arthroscopy and Arthroplasty surgeries, he finished his fellowship in Knee, Shoulder Arthroscopy and Knee, Shoulder and HipArthroplasty surgery including navigated replacement surgeries from orthopaedic Speciality Clinic, Pune which is ISAKOS approved training centre. He is one of the very few from Nashik to have been awarded the AustralianOrthopaedic Association Fellowship in Shoulder, Elbow and Knee Arthroscopy and Arthroplasty surgeries. His academic achievements were acknowledged by one of the legends in orthopaedic surgery Prof. Robert Laprade and he was awarded preceptorship and training opportunity at the U.S. Olympic Association Hospital at colorado, the U.S.A. where he could work with the best of the sports medicine surgeons, physicians and physiotherapists.

His selection for training in Advanced Shoulder Surgeries at the Prestigious Charite University, Berlin was his latest academic achievement. He is a keen academician and has several national and international publications. He worked as Assistant Professor in the Department of orthopaedics, Dr. vPMcH Nashik, and was popular among the students and his colleagues.

He has helped train several state-level athletes and has been an authority on physical training of the athletes, marathon runners and cricket, badminton players in Nashik and Mumbai. He has the vision to make all the sports and physical training ‘safe for all and his focus has been making Arthroscopy and joint replacement surgeries affordable and available to everyone.